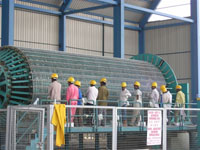 Where it is considered that normal reinforced concrete will not have adequate durability, galvanized reinforcement is often used in preference to conventional steel reinforcement.

While concrete itself provides natural corrosion protection to steel this may be lost as a result of aggressive species from more severe environments through the coating cover.

Galvanized steel reinforcement was first used on marine piers in 1953 and has become widely used for increased protection in such circumstances.

The following article is an example of this use.

Hot dip galvanized coatings are usually applied to steel that is already fabricated.  However, in a major project now under construction in Singapore, this convention is being reversed.  For this project, steel in the form of loosely-coiled wire bar, is being galvanized then formed around large mandrels into cages that become the steel reinforcement for sections of large diameter concrete pipe.

The pipes are part of the Deep Tunnel Sewage System (DTSS) which was conceived as a long term solution to meet the needs for used water collection, treatment and disposal to serve the development of Singapore through the 21st century. 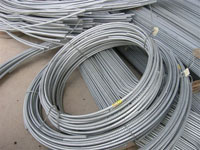 An integral part of the project is a large treatment plant at Changi from where a deep-sea outfall will discharge treated effluent into the Straits of Singapore at a distance of 5 km from shore. The outfall comprises two parallel under-sea pipelines, constructed from reinforced concrete sections laid end-to-end in a trench in the sea-bed. Each concrete pipe section measures 3.0 m in diameter and 8.0 m in length and contains 7-8 metric tons of galvanized reinforcing bar (rebar). In all, the pipelines will require 1300 individual pipe sections and will use a total of 10,000 metric tons of galvanized rebar.

The project has presented many engineering and technical challenges for both contractors and suppliers.  In the case of the ocean out-falls the need to ensure integrity and longevity of the pipelines under the service conditions encountered has required serious consideration and a deal of ingenuity. 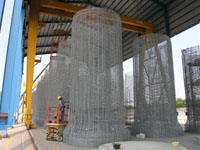 The corrosivity of sea-water coupled with the need to design for a service life of 100 years, dictated that the rebar should be coated to protect it against corrosion that could lead to spalling of the concrete, compromising pipeline integrity. The choice of galvanizing to coat the rebar was not made lightly as any coating had to be capable of withstanding site handling as well as being formed into the circular cage shape before placement in the moulds used to cast the concrete pipe sections.  The method of forming the reinforcement cages required that the rebar was of reasonable length and so it was decided to use coils of rebar rather than straight lengths.

Considerable work by both the contractor and the galvanizer was necessary before the optimum rebar size was established.  The decision to use coils as the start material required specialized handling techniques through the galvanizing process but too large a bar diameter would make the coils too inflexible for galvanizing.  On the other hand, too small a diameter would not provide the rigidity required of the cage when the rebar was formed.  Further, formability of the rebar was an issue as dimensional consistency of the finished cages was important to ensure the correct thickness of concrete cover. 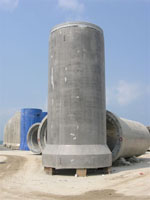 Galvanizing was finally chosen over other alternative coatings because of its resistance to site handling damage and the ability to provide long sections of rebar that would minimize joints and cuts that could potentially compromise corrosion protection.

The Changi outfall contract was awarded to the Dutch dredging contractor Boskalis International bv with pipeline construction by its affiliate Archirodon Group nv.