The recent refurbishment of a Route 66 bridge deck south of Kittanning, PA, provided a unique opportunity to assess the performance of galvanized rebar after more than 30 years of service. The bridge was built in 1973 using galvanized rebar in the deck. The bridge deck remains in excellent condition but the Pennsylvania DOT wanted to replace the post and beam medial barrier with a more secure concrete Jersey barrier. This required removing the entire middle section of the deck and exposing the galvanized rebar for inspection. Test found the chloride content in the concrete surrounding the rebar to be 5 lbs/yd 3, far exceeding the chloride threshold for corrosion of black rebar.

Inspection of the rebar showed that coating was in excellent condition with coating thicknesses still exceeding ASTM A767 specification for new galvanized rebar. Also noted during concrete removal was the tenacious bond of the galvanized rear to the surrounding concrete, thereby confirming the excellent bond strength obtained from galvanized coatings. No refurbishment of the concrete deck was required; the original rebar remained in place when the Jersey barrier was poured. 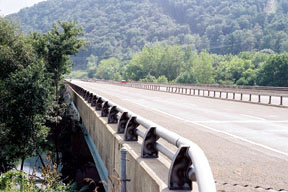 The Pennsylvania DOT has specified galvanized reinforcement for decades. One such bridge, the Athens Bridge, was built in 1973 and is an eleven-span, four-lane, divided bridge that uses only hot-dip galvanized reinforcing bars. The Athens bridge deck was inspected eight years after installation to ensure that hot-dip galvanizing was protecting the bridge from corrosion. Concrete cores were drilled and an analysis of chloride contamination and coating thickness was conducted. The chloride levels found in the cores exhibited concentrations between 1.8 to 7.9 lbs/yd3 of concrete, where the high end of these concentrations is well above the threshold for active corrosion to occur on bare steel. Despite these extremely corrosive conditions, the coating thickness measurements indicated galvanized coatings in excess of 15 mils (approximately three times the coating thickness required on newly-galvanized rebar according to ASTM A 767). In all instances, the galvanized rebar showed no signs of corrosion.

The Athens Bridge was later inspected in 1991 and 2001, and the analysis generated similar results. No sign of active corrosion on the galvanized reinforcement was found and coating thickness measurements reported were in excess of ten mils. These current coating thicknesses indicate an estimated 40-plus years of
additional maintenance-free corrosion protection. Although over 40 tons of hot dip galvanized open floor deck grating was used on the bridge, an ultimately covered by cedar planking, the focus of the bridge is the 25 tons of duplex coated railing. Previous positive results from the duplex coated Strawberry Mansion bridge made specifying of a galvanized and powder coated Germantown bridge easy. With significant involvement of the surrounding Chestnut Hill community and the requirement for a long-lasting and aesthetically appealing bridge, a duplex bridge was the ultimate choice. The expectation for corrosion-free performance is high from the community and for the city of Philadelphia. For a bridge with extreme public visibility, the galvanizer and fabricator worked tirelessly to ensure a fabricated handrail best suited for galvanizing, for any imperfection in the handrail welds, bends, etc. would be magnified by the zinc coating of hot-dip galvanizing and further highlighted by the powder coating applied over the zinc. Quality control and inspection was superior and the final product is in-place for appreciation by all of the taxpayers of Philadelphia. Almost 100 years after the Strawberry Mansion Bridge was erected, the City of Philadelphia forced it to close for renovation. Almost 60,000 ft2 (5,574 m2) of hot-dip galvanized open-grid flooring was filled with concrete. Galvanized rebar connected the grids instead of welds. This not only saved welding costs but also avoided any possibility of future problems with the welds. This bridge was constructed to accommodate the pedestrian and trolley traffic of the 1890s. Retaining the bridge’s historical character and detailed ornamental aspects was a requirement of this restoration. Hot-dip galvanized steel has helped to preserve this reminder of the 19th century and assures that visitors will be able to enjoy its graceful structure well into the 21st century.